Serendipity on the forecourt

Fuel retailer Jet faced an uphill climb with regards to brand awareness and affinity. But, with a rebrand that rolled out just when drivers needed it most, it has capitalised on its strategic objectives. Brittany Golob reports on Jet’s brand evolution

The Covid-19 pandemic put a halt to travel. It affected the UK’s ability to stay on the roads; to stay safe. For one company, though, its positioning allowed it to launch a brand transformation that not only improved its levels of awareness, but tapped into a wider narrative around hope, safety and the future of the nation.

In the UK, with major petrol providers partnering with the likes of Marks & Spencer, Tesco, Costa and many more, forecourts are becoming crowded, busy and inefficient. Jet, a heritage fuel brand based in the UK, wanted to refocus on the driver. It wanted to strip back all the periphery and focus instead on what it did best: keep people moving.

To do so, though, it had to examine both its B2B communications and its B2C brand and contend with the uncertainties posed by the pandemic.

“We have great strengths as a brand on our B2B side,” says Áine Corkery, manager, brand, UK marketing, Phillips 66 Limited– Jet’s parent company. “Our customers and relationships, our heritage; those are things to be very proud of.” Corkery first held brand workshops to understand the strengths it still held and determine what might be addressed in order to improve it in the future. The B2B model was a crucial advantage that should not only be retained, but emphasised going forward. That model focuses on working relationships with dealers – the owners of petrol stations who licence the Jet brand and fuel – that are supportive and communicative.

Phillips 66 conducted extensive research into both dealers’ views and consumers’ perspectives on the Jet brand. For dealers, the key issues were brand momentum, awareness and a continued focus on customer service. “They were really waiting for Jet as a brand to do something,” Lucy Alderton, B2B marketing specialist, UK for Phillips 66 says. “Jet dealers were ready for a change.” But that change didn’t cause the brand to depart from its core value of service first and foremost. In fact, the change in brand positioning helped Jet reinforce its relationships with dealers, infusing the company with a sense of excitement and forward momentum.

To do so, Jet had to examine not just its visual identity, but the way it positioned itself to both consumers and dealers. It had to update its marketing, communications and advertising alongside a reexamination of the forecourt experience.

For London-based independent creative agency, isobel, the B2B and B2C brands had to work in tandem. Jet’s ambitious programme to increase its market share, secure new sites across the UK and build brand awareness had to start with dealer relationships. “When we started working on the project, considerations were at 8%,” says Lisa Roscoe, business director at Isobel. “Jet was off people’s radars completely. Jet wanted to connect with more sites, speak to these dealers and get them involved in the new Jet world.” But, the challenges were considerable. Dealers often have long relationships with their providers and it’s tough to get them to switch. To convince more dealers to switch to Jet – and benefit from its relationship-focused B2B model – it had to build a stronger consumer brand.

Perceptions on the consumer side were poor. Corkery says the prevailing view of the brand was that “it didn’t really stand for anything and that it was quite old-fashioned.” That difficult starting point could have been compounded by Jet’s hyper-local focus. Its focus on communities has meant that Jet stations aren’t in motorway service areas. They are based in towns, villages and cities across the UK. Instead of jettisoning that and going big, Jet refocused on its local communities. It championed the community-first approach. Corkery says that it felt like the right path as it “stays true to what the brand stands for and where it comes from.”

The high-quality, low-price and no-frills attitude informed a new brand positioning. Corkery says Jet identified petrol as a ‘stress purchase.’ Customers want to get in and out quickly. They want efficiency. So Jet combined its local-first approach with a friendlier, more accessible option for drivers. It designed its entire brand around the positioning, ‘keep on moving.’

Isobel delivered a visual identity that aligned with with Jet’s brand ethos. It stripped back all the unessential communications, keeping things simple. This harked back to Jet’s founding in the 1950s. It was designed to offer all the essentials and nothing more. “That makes it quite distinctive versus other petrol stations,” says Roscoe. “Sometimes you just want the essentials. The bedrock of most of the comms are around ‘we’ll get you in and out. We want to focus on the driver…They’re trying to bring it back to basics and make that experience the best they can.”

The logo itself received only minor touchups, simply to make it more friendly. The arc shapes were softened and the signature yellow colour brightened. “The famous yellow has been around for so long and has served us so well,” says Corkery. “We also wanted to bring that to the forecourt.” To do so, Jet introduced a grey silver that complemented the yellow and blue palette. It simplified signage on the forecourt, but made the most of its real estate with simpler, more impactful messaging.

Corkery adds that safety was a huge consideration for consumers. To address this, lighting played a role in the rebrand. Under-canopy LED lighting was introduced to improve visibility, facilitate greater levels of safety and encourage people to go into the forecourt shop.

In addition to the refined logo, colour palette and forecourt experience, a visual world was built out for use across Jet’s communications. On social media, this resulted in short Instagram-ready animated clips that feature straightforward, clear messaging about Jet’s products and experience. But, the videos are playful, bright and cheerful, driving engagement with the digital content. Roscoe says, “We’ve had a lot of positive comments on our channels, which is very unusual for a petrol station. We’re continuing to push content that is engaging and will raise awareness with consumers.” The focus in every video is still on keeping things moving; on keeping drivers on the road.

The new brand translates well across dealer communications too. The visual identity makes for simple, clear dealer communications that focus on simple, impactful messaging like, ‘Safety never looked so good,’ and ‘Next stop: new forecourt.’ Dealers were engaged throughout the rebrand process. Alderton says dealers were eager to implement the new brand. They were pleased to see Jet’s future-facing strategy. “There’s a lot of momentum now with Jet,” she says. “Our dealers represent our brand in their individual businesses. The more we do for them, the prouder they are of Jet.”

Dealers were also targeted with messaging tying Jet to Phillips 66’s Humberside refinery and its developments in fuel research, resulting in its new Jet Ultra products. The connection to the masterbrand served to build trust in Jet and faith in its commitment to the UK for the long term.

That makes it quite distinctive versus other petrol stations. Sometimes you just want the essentials. The bedrock of most of the comms are around ‘we’ll get you in and out. We want to focus on the driver…They’re trying to bring it back to basics and make that experience the best they can.

The centrepiece of the brand launch, though, is a TV advertisement that brings all of Jet’s values and its positioning to life. “We wanted to bring something different and stay true to Jet,” Corkery says of the strategy behind the advert. Originally planned for an April 2020 release, Covid-19 caused Jet to reevaluate its plans. Instead, the ad debuted in September, at a time with the UK was opening up again; when people were once again on the roads. The timing change proved unexpectedly serendipitous as it tied seamlessly into Jet’s ‘keep on moving’ positioning.

The film features a man playing a piano as they drive across the Yorkshire countryside. The striking scenery of the moors rolls by as the singer croons, “We, so tired of all the darkness in our lives,” in a cover of Joe Jackson’s 1982 hit ‘Steppin’ Out.’ The mood of the spot is hopeful, further tapping into national sentiment that was – at the time – beginning to dream again. The piano pauses for a quick fill-up at a Jet station, popping in to the shop to pay and grab a bag of crisps before it’s back on the road with the countryside streaming by once again. “We wanted to bring something different, but stay true to Jet,” Corkery says, adding that the filming location of the White Rose station in the Barnsley area was ideal. “That’s one of our our strongest regions and it’s based close to the refinery.” Messaging like ‘Keep on moving’ and ‘stay safe’ fit seamlessly into the wider pandemic conversation while still remaining true to Jet’s brand values. 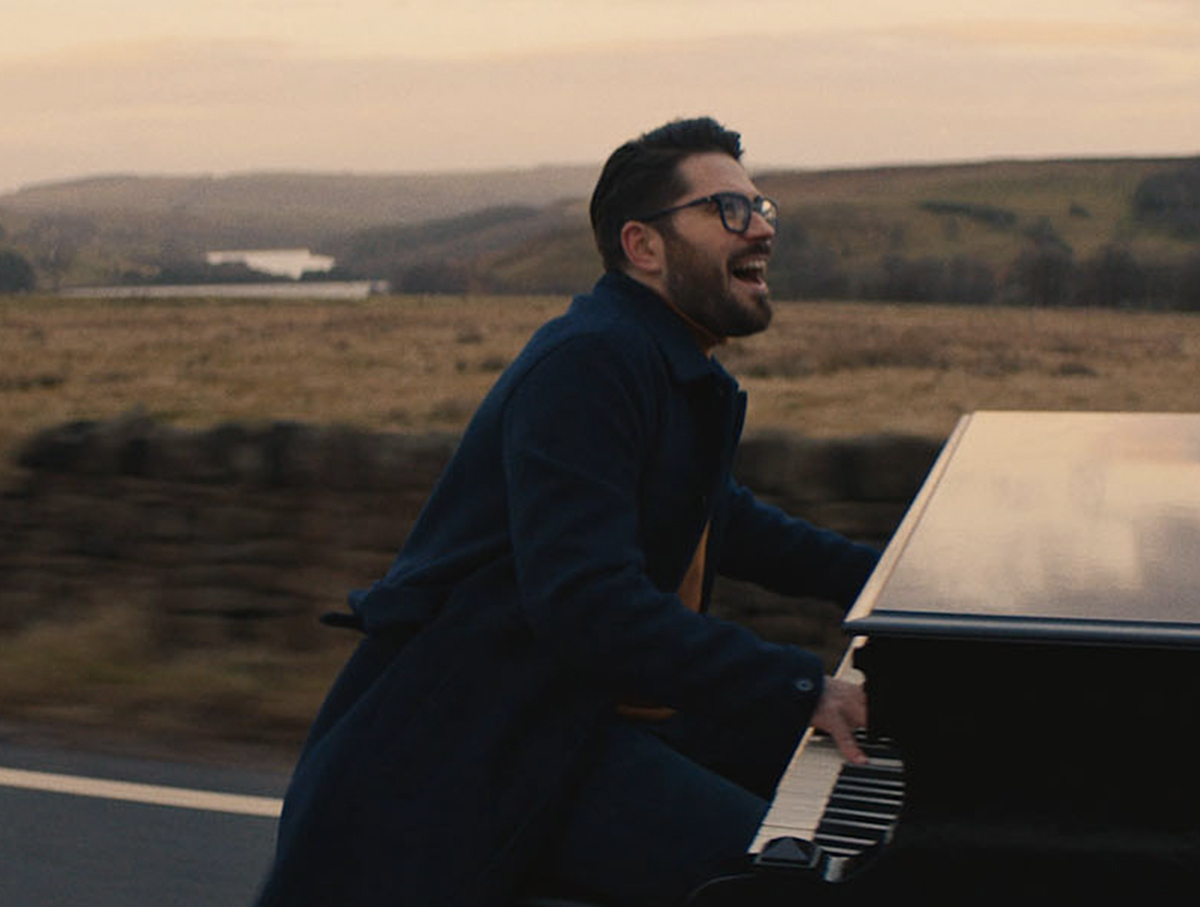 The ad debuted through Sky AdSmart, which allowed Jet to use a geotargeted approach, serving areas with Jet stations first and foremost. Eventually, the ad will be rolled out nationally. Roscoe says the unusual approach was “very brave,” adding, “You don’t usually see a piano driving into a petrol station!” But it fit seamlessly into Jet’s approach: stay local, keep things moving, raise awareness and modernise. “The biggest challenge when you roll out anything new is that it doesn’t make any sense or people don’t get it,” Corkery says. “But it was embraced. That was a very nice surprise that it felt right on all sides; B2B and Phillips 66. We exceeded our expectations and people just got it.” Alderton agrees, adding that these are just the foundations for the brand’s future. “We’re slowly changing those perceptions and building that awareness,” she says.

The landscape for fuel and automobiles is changing in the UK, though. The government’s commitment to end the sale of new petrol and diesel cars by 2030 poses challenges for companies like Phillips 66. But, part of the company’s ongoing dealer communications is around the future of fuel. “We’re looking at the filling station of the future,” says Corkery, adding that Phillips 66 has engaged with the government around its plans. It is developing alternative fuel options while also engaging in greater carbon capture activities. “It is really important for customers and dealers to know that we are doing this. It’s something that’s very important for our strategy,” she adds. It’s all part of building trust between the dealer and consumer and the dealer and the brand. If dealers believe Jet will stand by them in what may seem an uncertain future, Jet will foster trust. Similarly, on the consumer side, with clear communications, the prioritisation of safety and the understanding of what people want from a petrol station, brand awareness and affinity will grow.

Fuel keeps people moving. But the disruption caused by the pandemic hampered that drive. Jet – perhaps unintentionally, but authentically – captured a sense of momentum, safety and forward-motion that allowed its rebrand to connect it more deeply to its audience across the UK.