Myanmar 2021: Where creativity has become a mater of life or death

Every marketer, advertiser, brand manager or creative feels that what they are doing is important – producing the very best and most engaging creative content and then trying to plot the smartest way to maximise the number of people who see it. And better still, share it. All attempting to create some form of change or action, or who knows, even a movement.

But very rarely does the success of a creative campaign come down to a fight for democracy. A fight for freedom. And ultimately, life or death.

These are the very stakes facing a creative campaign emerging from Myanmar, seeking to drive awareness and active engagement throughout the world.

Myanmar’s move towards democracy is recent. The country was under complete military rule from 1962 to 2011. I was fortunate enough to visit in 2011, and despite the unbelievable beauty of the country and its people, it was extraordinary how diferent it was to every other country I have ever visited, with seemingly very little interaction with the outside world – no ATMs, no mobile phones, very little internet. The tight military grips on progression were everywhere to be seen.

The last nine years has been diferent, with strong economic growth, the emergence of a middle class, along with the entry of big global brands, 4G and mobile banking.

But on 1 February this year, all progress was reversed, when a military coup ended Myanmar’s short taste of democracy, with elected leader Aung San Suu Kyi and members of her National League for Democracy (NLD) party detained. The military seized control after a landslide NLD election win.

Peaceful pro-democracy protesters have been met with extreme brutality. More than 500 people have been killed since the start of February, including more than 100 protestors on Saturday 27 March alone. Among the dead are children, some who have been killed in their own homes by the security forces that are mandated to protect them.

In addition to the millions who took to the streets, meme-savvy Gen Z protestors started to use art and satire to bring a viral component to the protests, continuing a long history of artistic defiance in the country. 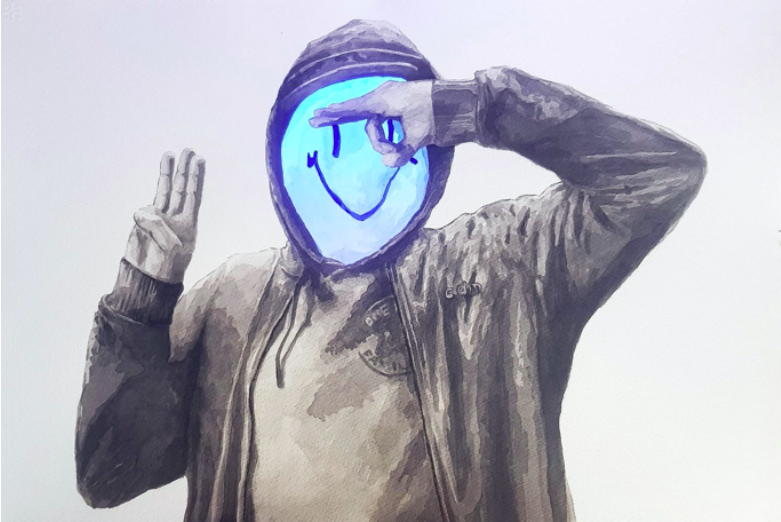 Since the detainment of the country’s leaders and Suu Kyi and the reinstatement of military rule in February, international leaders have been quick to voice alarm and concern, with threats of sanctions and calls for their release. But no progress has been made, and the violence is escalating quickly. The people of Myanmar may well fear that they are in for another long stint without their freedom.

So, with little action so far from the outside world, and the world’s news still dominated by Covid, a collective of creatives and artists from Myanmar have sounded a rallying call to the global creative community, to project the nation’s voice around the world.

The campaign, Raise Three Fingers for Democracy, calls upon allies and artists from all nations to raise three fingers in a cry to reclaim democracy and amplify the voices of the Myanmar people. The three-finger salute, popularised by Jennifer Lawrence in the Hunger Games film series, has become a symbol of resistance in pro-democratic protests in Thailand, Hong Kong, and now in Myanmar. 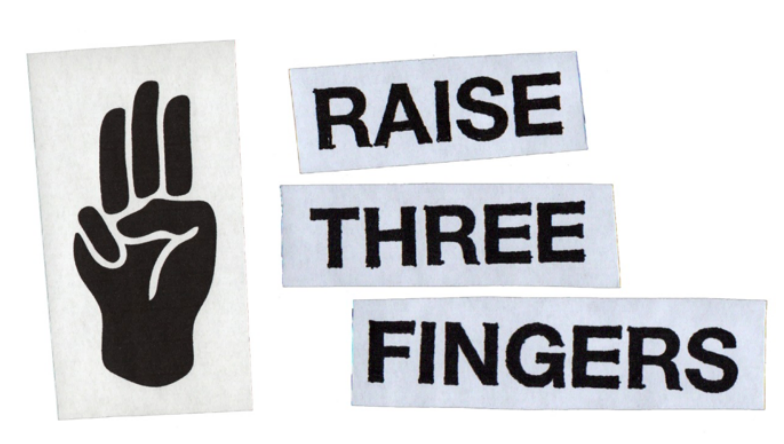 The gesture represents a global solidarity for democracy, defiance against tyranny, and the fight for freedom. Maw Kun Thit, a filmmaker and founder of the campaign, sees it as a powerful symbol of unity and defiance. “It says we’re in this together, and that we don’t accept this coup. We will do whatever we can to overturn it. We can’t protest publicly, we can’t wave placards, and we don’t have weapons, but we can hold up three fingers.”

As marketers will recognise too well, the louder the volume of the campaign, the harder it is for those seeking to steal Myanmar’s freedom to succeed. So once artists have created their version of the three-finger salute, they are encouraged to share it as widely as possible, in their networks and beyond, to create a viral movement to continue the spread of awareness and engagement around the issue. 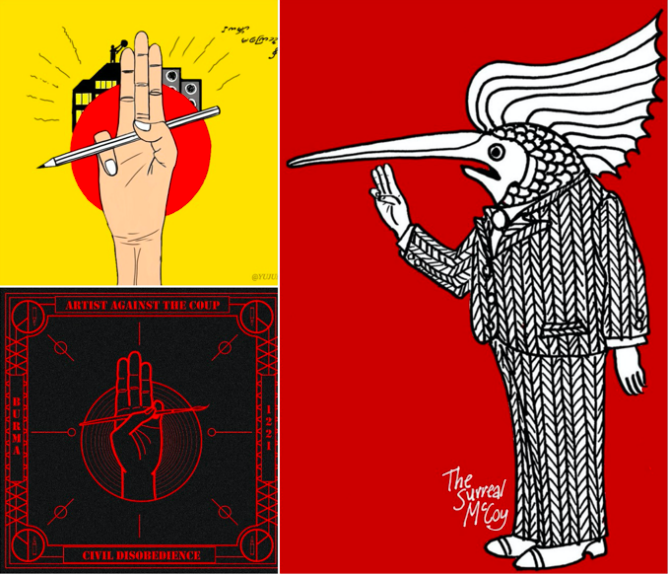 Ultimately, the campaign seeks to use the power of this creative collective to mobilise a global audience, grow awareness, raise funds for pro-democracy groups, and lobby organisations and governments to step up the pressure and defend democracy.

There are many forms of protest, and it’s understandable that the persecuted are often willing to try anything to win their freedom. So, for anyone working in the marketing and creative industries, its hugely inspiring to see creativity and art at the heart of a prodemocracy freedom movement. When executed well, creativity can have extreme potency. It can mobilise people, it can cross borders, and it can drive genuine change.

The fight for democracy in Myanmar is perhaps in its infancy. International momentum is desperately needed to ensure this military coup doesn’t last for another 49 years. There will no doubt be unimaginable sacrifice along the way, but if this campaign is successful in its aims what a powerful moment it will be for everyone who contributed, for the campaign originators, and for the power of creativity.

Most marketing initiatives are ultimately judged on return on investment (ROI), but if the return that is sought is freedom and a nation’s democracy, how can the level of investment ever be too great?

More information on the campaign can be found at threefingers.org.

Originally published on Campaign.     The Thinkbox Academy will vote f...

This just in. It’s a royal flush. We’re going to be working on a bol...

Own label to brand

How brands emerge from own label categories.   Whether meat, dairy, or pean...